How fast your body metabolizes protein probably comes up if you're trying to build muscle, gain weight or consume the right amount of protein to ensure your muscles recover properly following an intense workout. The rate of metabolism is influenced by many factors, so it's not a simple story. To plan protein intake, you'll need to know how much protein your body can metabolize over a specific amount of time and the importance of deciding exactly when to consume it. 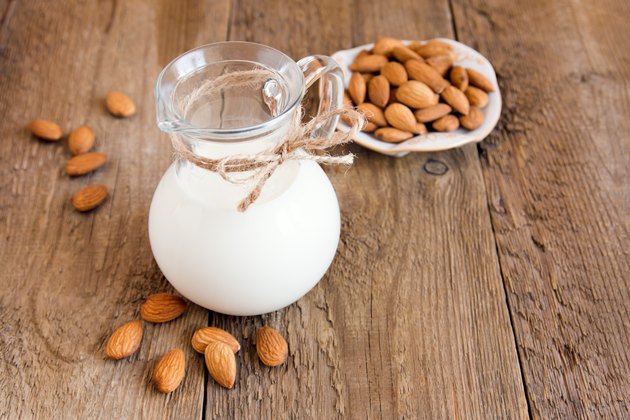 The technical definition of metabolism includes a lot more than the common usage of the word. Protein metabolism includes every process that builds new proteins and breaks down existing proteins in the body. When most people talk about metabolism -- especially when they're concerned about protein metabolism -- they're focused on digestion. They want to know how soon after consuming protein they can expect amino acids to enter the bloodstream and find their way to muscles.

The speed of protein metabolism goes up and down based on numerous variables. For starters, all of the appropriate enzymes and nutrients required for metabolism must be available, which hinges on getting all your other important nutrients and having a healthy body. But that's just the beginning of a long list of potential confounding factors. If you take antacids, protein digestion may be hindered, because antacids lower stomach acid and protein needs acid for digestion. What you eat along with protein also makes difference. A protein beverage consumed on an empty stomach quickly travels into the small intestine and bloodstream. But, if you eat a big steak, it spends about 20 minutes in the stomach, and digestion and absorption take even longer.

The small intestine absorbs amino acids at the rate of 1 to 10 grams per hour, according to a report in the International Journal of Sport Nutrition and Exercise Metabolism in April 2006. At first glance, it seems like eating a large amount at one time might lead to wasted protein, but that's not the case. Digested food stays in the small intestine for hours, so at the rate of 10 grams over three hours, 30 grams of protein should be absorbed. Under normal circumstances, at least 90 percent of the protein consumed will be metabolized.

Here's a twist you may not expect; speed isn't always desirable when you want to maximize protein absorption. A thick protein shake that contains some fat travels through the small intestine in about half the time of solid food. If the shake contains more protein than can be absorbed before it enters the large intestine, the extra protein goes to waste. The average amount of whey protein concentrate absorbed is 15 grams, reported the Journal of the International Society of Sports Nutrition in July 2008. So it makes more sense to drink smaller protein shakes several times daily. You could also drink the shake with a meal because adding food slows down the movement of the beverage.

The amount of protein consumed at each meal -- and the frequency of eating -- influences the metabolism of protein in muscles. When you synthesize protein in muscle, you build muscle mass. Researchers found that it only takes one 30-gram serving of protein-rich food to increase muscle protein synthesis 50 percent above fasting levels. In people of all ages, consuming more than 30 grams of protein at one time doesn't add any muscle-building benefit, according to the study's results, which were published in the Journal of the American Dietetic Association in September 2009.

You'll also boost muscle protein synthesis by eating your protein at regular intervals throughout the day, reported the Journal of Nutrition in June 2014. In this study, the researchers compared the impact of eating about the same amount of protein at three evenly spaced meals, versus getting a large proportion of protein at one meal. They found that a regular supply of protein stimulated 24-hour muscle protein synthesis better than eating most of your protein at the evening meal. While it makes sense that providing an even supply of amino acids keeps protein metabolism humming, this study doesn't offer definitive proof. It only included eight subjects, which means the results might not apply to everyone.

One of the most important things you can do to ensure optimal protein digestion is to protect your overall health. Talk to your doctor if you experience gastrointestinal problems that don't go away, such as pain in the stomach or abdomen, heartburn, excessive gas, bloating or diarrhea. These symptoms may indicate the presence of inflammation or a health condition that interferes with protein metabolism.

You may also boost protein metabolism by following guidelines from the Specific Carbohydrate Diet, or SCD, which was designed to relieve symptoms caused by Crohn's disease, ulcerative colitis and irritable bowel syndrome. The SDC emphasizes eating to ensure complete digestion. To meet that goal, it suggests eating all of your meat first so that it's covered by acids needed to digest protein, before other food enters the stomach. The diet also recommends not drinking with the meal to avoid diluting stomach acid.

Some types of foods contain anti-nutritional factors, which means they include substances that inhibit nutrient absorption. Most people can mix foods without worrying about protein digestion. But if you follow a strict resistance training regimen, you may want to eat proteins separately from foods with anti-nutritional substances that affect protein absorption. These include mustard and canola products, legumes, cereals, soy beans and soy products. People on a vegan diet may need to consume extra total protein to offset the impact of anti-nutritional factors. Consult a registered dietitian if you have any concerns about your protein needs.

REFERENCES & RESOURCES Colorado State University: Control of Gastric Emptying International Journal of Sport Nutrition and Exercise Metabolism: A Review of Issues of Dietary Protein Intake in Humans Colorado State University: Gastrointestinal Transit: How Long Does it Take? European Food Information Council: Nutrient Bioavailability -- Getting the Most Out of Food Journal of the International Society of Sports Nutrition: An Open Label Study to Determine the Effects of an Oral Proteolytic Enzyme System on Whey Protein Concentrate Metabolism in Healthy Males Journal of the American Dietetic Association: Moderating the Portion Size of a Protein-Rich Meal Improves Anabolic Efficiency in Young and Elderly Journal of Nutrition: Dietary Protein Distribution Positively Influences 24-Hour Muscle Protein Synthesis in Healthy Adults SCDiet.org: Ways to Improve Protein Digestion British Journal of Nutrition: Impact of Antinutritional Factors in Food Proteins on the Digestibility of Protein and the Bioavailability of Amino Acids and on Protein Quality