Mugicha is a traditional Japanese tea made of roasted barley. It is served hot or as a cold summer beverage. Barley is a caffeine-free grain and the Colorado State University Extension says that it contains minerals and vitamins that helps to prevent diabetes, maintain an adequate weight and reduce cholesterol. That is possibly why mugicha is often associated with health benefits, not all of which are scientifically proven. Consult your doctor before using mugicha medicinally. 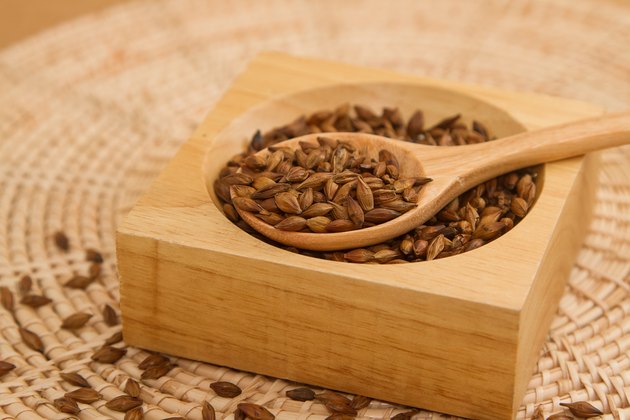 A wooden bowl and spoonful of mugicha on a woven mat. (Image: praisaeng/iStock/Getty Images)

In his 1993 book “The Cancer Prevention Diet,” Michio Kushi, a leader in the macrobiotic and health-food movement, includes roasted barley tea in the list of beverages that prevent cancer. Kushi does not explain barley’s anti-cancer mechanism, but a look at some of the grain’s nutrients offers a clue. According to the National Barley Foods Council, barley provides vitamins A, C, E and the trace mineral selenium. The four are antioxidants, substances that protect your cells from disease-causing molecules called free radicals. Although the tea is made of the grain, it is relevant to note that, in a discussion about barley leaf, the information website Drugs.com says that science has not determined whether it is a cancer preventive or cure.

According to a 2006 article in the “Journal of Agricultural and Food Chemistry,” barley “coffee,” a beverage made of roasted ground barley like mugicha, protects your teeth against cavities. It does so by preventing the bacterium Streptococcus mutans from proliferating on the tooth's surface and causing decay. If you enjoy mugicha, be aware that adding sugar to your drink may neutralize its anti-tooth decay benefits.

Macrobiotics guru Michio Kushi says that mugicha “melts animal fat from the body.” He does not explain how he reached his conclusion, but barley is able to reduce fat and cholesterol in the body, according to a study in the 2013 issue of "BioMed Research International."

The Tao Healing Arts Center in Santa Monica, California, says on its website that mugicha facilitates digestion and helps your body to flush impurities. Michio Kushi also writes in the “Cancer Prevention Diet” that the tea relieves fever. If researchers have studied barley for those properties, the results proving or disproving them have not become readily available to the public.