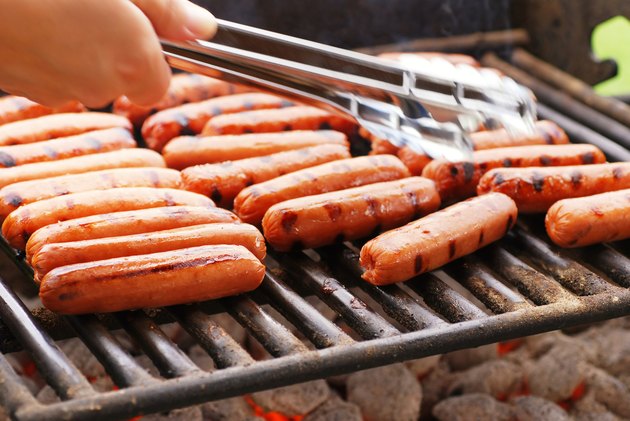 A typical uncured beef hot dog contains approximately 70 calories with 50 of these contributed by fat, or around 6 total grams. It also has about 2 grams of saturated fat, 20 milligrams of cholesterol and 6 grams of protein per hot dog. Each uncured beef hot dog contains 330 milligrams of sodium, or 14 percent of the amount an adult should limit himself to each day. For a healthier uncured hot dog, choose turkey or chicken brands that are low in sodium.

All commercial brands of uncured hot dogs have been fully cooked -- they aren't raw. According to the National Hot Dog & Sausage Council, cooked hot dogs need only to be heated thoroughly before eating. Choose a preparation method that doesn't require added fat, such as baking, microwaving, grilling or broiling. You can also steam uncured hot dogs in a covered pan of liquid that's been brought to a boil and then removed from the heat. Use tongs to handle cooked hot dogs: puncturing them with a fork may cause them to lose their accumulated juices.

While you may choose uncured hot dogs over their cured counterparts because they are free from artificial preservatives, it's still unwise to give them too large a place in your diet, says the Harvard School of Public Health. A high intake of processed meats like hot dogs may increase your risk of cancer, diabetes or heart disease, particularly if you choose beef or pork hot dogs. Eat hot dogs only occasionally and in moderation.